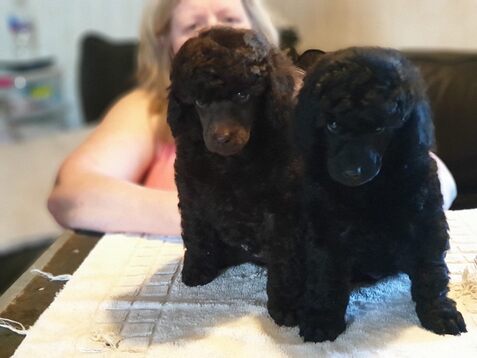 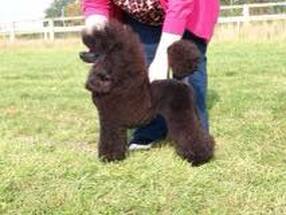 Gertie came to us when a friend used Dodger at stud, Katie showed her lightly but due to Katie being in poor health, Gertie was shown very little.
In 2019 Gertie graced us with our first miniature litter in almost 9 years, 2 boys, 1 black, 1 brown "Bob & Barry" 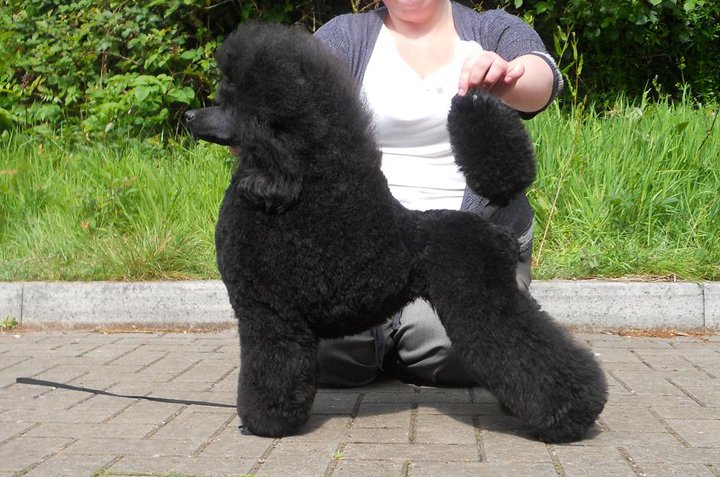 Montana's Seventh Heaven ShCM
'Dodger'
Jayandri Top Marks To Shanandi X Montana Liquirish Witch
21/5/10
pcrd-PRA - NORMAL/CLEAR
OCD - Carrier
Bred & Owned by Katie
< < 12Months Old
From the word go I had my heart set on keeping a bitch puppy, had her named planned the lot! at 6weeks old Dodger & his two sisters were clipped bathed & trimmed. This is when dodger stuck a spanner in the works!!seeing him stacked up & acting the showman i realised then that i couldn't part with him & he was without a doubt pick of litter. Naturally this caused rather a debate between me & mum as we really did not need another miniature dog to add to the equation! But after several weeks of thinking it over Dodger stayed put. He made his debute to the show ring on the 21st of November this year & was a dream to show & went on to win his class, Best Puppy In Breed & Best Of Breed!! 5 days later he won Best Puppy in the Supermatch Qualifying Heats then qualifying him for the South West Regional Finals in Feb 2011!!  Dec 11th 2010 was LKA Championship show (His 2nd show) & won himself a very respectable 2nd in puppy dog qualifying him for Crufts 2011! His critique can be found on our Critique page.
**********
At just 14 Months old Dodge wins the RCC at Paignton Championship Show under Arturo Sheppard from Junior!
**********
We found out late December that Dodger had qualified for the "Poodle Of The Year Gala Contest", this is a competition where the top 16 dogs from each size of poodles come to together for the title of "POODLE OF THE YEAR" - Dodger did us all so proud by qualifying & showed his socks off!!

Fiona is Katie's foundation bitch that she showed until she was 3years old. Sadly Fee had a nasty scare at a show & didn't enjoy showing anymore. She is Dodger mother & since having her litter she has been to a few shows in her new trim & enjoyed it immensely! She will be shown now & again at breed club shows in the Any Other Trim class for a bit of fun!! 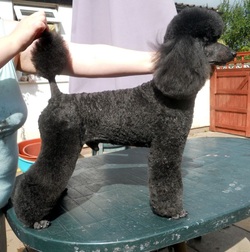 Fred was shown alot as a youngster & did well winning consistently. We stopped showing him as he hated being caged at shows & got himself into a state & also had toys coming up. He is now 9years old & will be returning to the ring as a veteran soon!!

Fred carries the brown gene & has sired many litters producing black & brown puppies, he has produced consistently & several puppies of his have been shown with success. 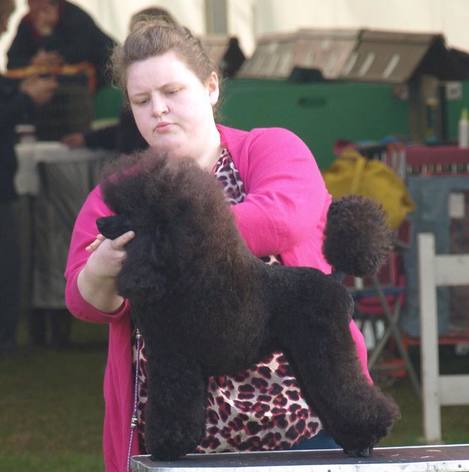 Gertie joined our family at 8 weeks old, full of michief & personality. Due to Katie's ill health Gertie was rarely shown & at two years old we decided Gertie just wasn't a show prospect for us. She's now loving life without her show coat & is a bigger clown than ever & dearly loved. At the time Gertie came into our lives, so did someone else, Bruce a large rescue Staffie, Gertie has grown up with him from a young puppy & it's safe to say the pair are inseparable & the very best of friends