Montana Worth The Wait ("Chubba") 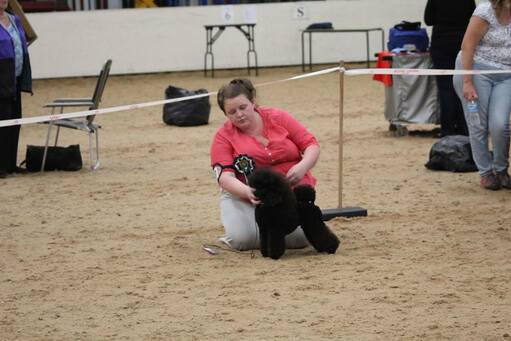 The mating resulting in Chubba & his brother "Percy", was long awaited & anticipated. Their father, "Buddy" is a son of a dog imported into the UK from America & their mother, is Masie.
Upon turning 6 weeks old it became very obvious that Mum & I had differing opinions on who should stay & no matter how many times we debated it, we both had valid reasons for wanting each boy to stay. Eventually the inevitable decision was made to keep both boys.
Chubba is a lovable rogue who goes through life trying to please me, he's been a challenge at times but the outcome & grey hairs are certainly worth it. Chubba's first few months in the ring were ... memorable ! He did just as he pleased & made his own rules to showing as he went along!  At just 11months old Chubbs astounded us all by winning his first RCC, he continued to consistently place in his classes & at Crufts 2019 he joined the big boys in a large, strong Limit Dog class, which he went on to win & was later held in the last 3 for the CC.  In 2018 while still a youngster Chubbs won multiple Best Puppy In Show's, Best In Show's & Reserve Best In Show's. We are very excited going into 2019 to see what Chubba does next ... 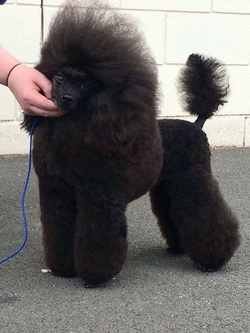 Greg was everything we had agreed not to keep ... a boy & black ... we had hoped for a brown girl, even a brown boy ... but got Greg & 2 black girls! At six weeks old it was very obvious that Greg was every inch the showman with his huge personality, attitude & brimming with self importance.
Due to Katie's ill health Greg wasn't campaigned as much as we would have liked to begin with, though everywhere he did go he held his own winning his classes.
However at 3years old he starting really coming into his own winning BOB's at Ch shows.. At Paignton Ch show in aug 2016 Greg did us proud winning his first CC & going on to take Best Of Breed also under breed specialist Philip Langdon. At Darlington Championship Show 2016 Greg gained his 2nd CC under Paul Harding & Paignton Championship Show 2017 Greg made a dream come true & won his final & crowning CC with Best Of Breed to top it off, under breed specialist Peter Banks. We can't put into words what this accolade means to us & want to say a huge thank you to the judges who thought so highly of Greg, loving him as much as we do. Greg has sired litters of black & brown puppies, he has sired litters both here in the UK & in Japan where his 'kids' are being successfully campaigned.

Alongside Greg one of his sisters who is owned & adored by Carol Farrow (Wimbush) was shown successfully.

Montana Worth Waiting For ("Percy") 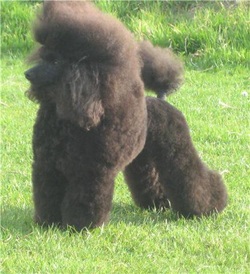 I began showing Adam ( Montana Hot Stuff) at 6 months old, he was a promising looking puppy and qualified for crufts at his first show. His showing career continued well and was always getting placed in his classes. During this time my daughter Katie began to develop a special bond with him. At home the two of them were inseperable and she began doing all the grooming of him. At this point I decided to let Katie show Adam as it was obvious the two of them had developed a strong bond. Katie showed Adam in Jersey at 15 months old and he won the CC under Mr Paull Gay.this was another proud moment for Montana. Since then Adam has won several Best in shows and BOB at open shows, 6 limit classes and won a RCC at Northern toy poodle club in February 2010 under Miss Carol Farrow. We hope his winning continues and we would like to thank all the judges who have thought so highly of him. After Crufts 2012 Adam came home & the next day we put him in T-Trim, he will be kept in this trim for the next year or so but WILL be back out before long in his new trim!!  We will then grow his coat back & he will be back for Veteran.' 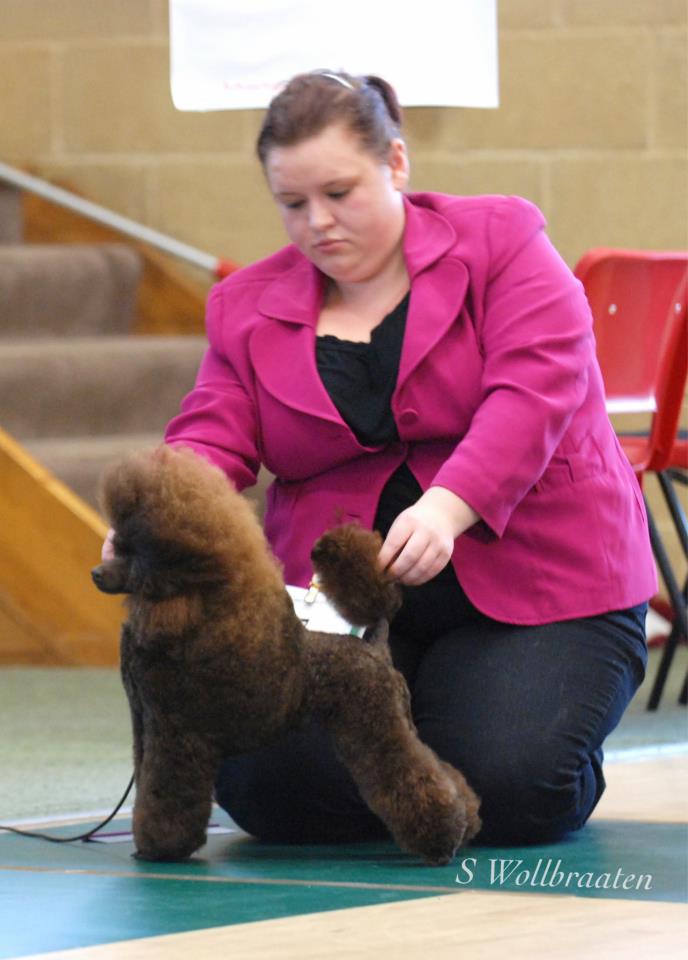 Henry's litter has been very exciting for us as it was one the first brown litter in  4years for us & we were not disappointed!
This little lad is a huge character to live with, so extrovert yet quite a sensitive mummy's boy too! He made his debuté a at Breed Club Show, South Western Poodle Club & took RESERVE BEST PUPPY IN SHOW!! At just 7 months old, he did amazingly!! He showed with true poodle spirit (With the added touch of brown!!) & marched around the ring holding his lead in his mouth, loving every second of the day. He continued his winning ways by winning numerous Best Puppy In Show's & Best In Shows. Although shown a fair amount as a youngster, before long the inevitable happened as with all browns, his color started to fade so we retired him from showing but not before he won his first class at Crufts & being held in the last 3 for the DCC under breed specialist (And avid brown lover) Mrs Lesley Howard. Henry is enjoying his retirement & loving being a 'bedbug' sleeping under Katie's duvet