Montana In My Own Time 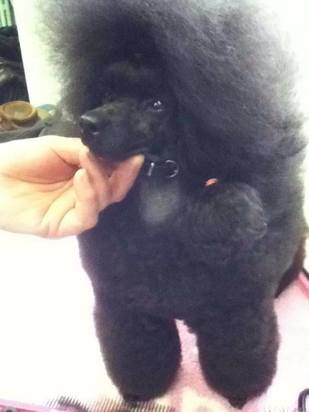 Masie was lightly shown due to a nasty scare at a show towards the beginning of her show career, a couple of years later we gave her another shot to see how happy she would be & success, she loved it again! Masie went on to win numerous classes & Best Bitch at multiple breed club shows. Masie is mother to Percy & Chubba & was a wonderful mother. 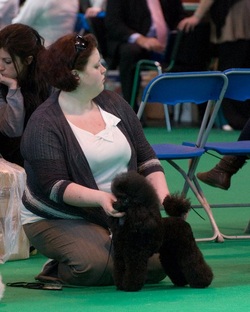 Gracie has only been lightly shown. Gracie has been held back because as a youngster she had a scare at dog training & so it has taken alot of patience and reassurance to rebuild her confidence. Her first show was South Western Poodle Club Open Show she was in the same class as Baby (shown below) in Puppy Bitch and she won the class.She then went on to win Best Puppy Bitch & Reserve Best Puppy In Breed to 'Buddy'.March this year we took her to The international Poodle Club & she won Junior Bitch. It was rather a battle getting Gracie's confidence back but it was really worth it and she has turned out well. Gracie is more commonly known as 'the family fruit cake!!' She's a real darling to live with and is so much fun. Katie worked hard to get Gracie showing again and she will also be handling her in the future. We hope to have her out as much as possible in 2010. We'd like to say a big Thank You to the judges who have thought so highly of her and have been so patient with her to let her confidence develop again. APRIL 2012 - We cut Gracie's coat off, she will attend a few breed club shows in her new trim but will be taking a back seat for Pixie & Priscilla to strut their stuff 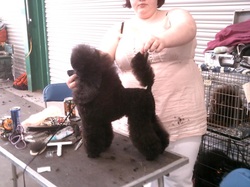 Pixie is a daughter of the first litter of puppies Adam had sired. she made her debuté at Paignton 2011 but sadly had a scare in the ring, we kept her out of the ring until we were sure she was confident enough to return. Pixie will be back out in March 2012!!